Bubblegum Pop: Part 3
While the music of Tommy James & the Shondells spans a wide variety from garage rock to psychedelic rock, some of their tunes have been retrospectively labeled as an early form of the bubblegum sound. Released in 1967, "I Think We're Alone Now" was one of Tommy James' most successful recordings, reaching #4 on the US charts during a 12-week stay, and was later named "the bubblegum apotheosis" by some rock critics. Like several of James' records, this was a picture-perfect production masterpiece and a great pop tune with a heart-beat bass line (basically a template for bubblegum pop). Apparently because the bass player that didn't show up to the recording session, James improvised that bass line on guitar himself. This classic, good-timing tune has been covered several times by other artists (a staple for my dad's garage band in the '60s!), including a #1 hit version by Tiffany in the '80s. 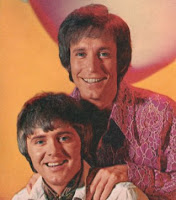 The prolific songwriting duo of Boyce & Hart had a talent for writing upbeat, hit songs (later called "sunshine pop") that made for the perfect segue into bubblegum pop. After working for Screen Gems and creating the sound of The Monkees, Tommy and Bobby set out together on their own recording adventure, producing three albums with Top-40 hits including "I Wonder What She's Doing Tonight" (previously featured here), "Out And About," and "Alice Long (You're Still My Favorite Girlfriend)." Written, produced, and performed by the duo, "Alice Long" reached #16 on the Cash Box chart and #27 on the Billboard chart in 1968. In this Monkees-like musical romp, these guys look like they're having a great time in this promo video they filmed featuring "Alice Long."

Speaking of The Monkees, there is actually some debate online as to whether they were really a bubblegum group (one such hilarious debate here). Yes, these guys were initially a prefabricated band, manufactured to sell records of hit songwriters (the perfect prototype for bubblegum pop), just like the studio-assembled music by Super K Productions from a few posts ago. Before the group staged a coup and took control over their own musical output (this altering their sound), they definitely had some hook-filled pop tunes with that touch of bubblegum, particularly tunes with Davy Jones' vocals. Amongst a very extensive catalog including power pop, psychedelic rock, country rock, garage rock, and even Broadway rock, this Neil Diamond-penned number, "A little Bit Me, A Little Bit You," was actually released against The Monkees' wishes (they had planned on releasing "All of Your Toys" here, the now legendary single-that-never-was), yet it did manage to reach #1 on the Cash Box chart and #2 on the Billboard chart in March of '67. In this musical sequence from their TV show, The Monkees are apparently trying to sabotage the movie career of a pompous singer, played by Bobby Sherman (before he hit teen idol status the following year)! 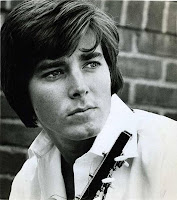 So next up, of course it's American singer and actor Bobby Sherman, who's not pompous at all but among the most kind-hearted and charitable of stars. Being the first performer to star in three different TV series before the age of 30, Sherman began his entertainment career as a regular cast member/house singer for ABC's Shindig! in the mid-'60s (which I'm thoroughly impressed with his cover performance of The Zombies' "She's Not There," featured on the show here), but he didn't become a breakout star and teenage heart-throb until 1968 when he starred in Here Come the Brides. Besides a successful recording career that earned him seven gold singles, one platinum single, and five gold albums, he found another calling in life in the mid-'70s, becoming a certified EMT (emergency medical technician), and since the '90s, he has served as a medical training officer for the Los Angeles Police Department, instructing thousands of police officers in first aid and CPR (what a guy!). Here's a performance of Sherman's first million-selling single, "Little Woman," which peaked at #3 on the Billboard charts in 1969.

Well, since our final Bubblegum post scheduled for next week is only featuring family groups, I better toss one last group to complete this post. Another studio concoction created by Super K Productions, Crazy Elephant was a short-lived American bubblegum pop band in the late-'60s. Known as a transatlantic one-hit wonder, their 1969 single "Gimme Gimme Good Lovin'" made it to #12 on both the US and UK charts, however, their follow-up singles failed to chart. Allegedly, Cash Box magazine promoted the band as being a group of Welsh coal miners (huh?). Like other Super K-created bands, a touring group was later formed for promotional purposes. With random but fitting footage of the Hullabaloo house dancers, here's an audiophile showing off his original 45 of this fun, bubblegum standard.