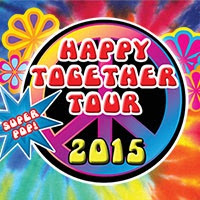 On July 22nd, my college buddy (music major too!) and I enjoyed a groovy night of The Happy Together Concert at a fantastic outdoor venue, Humphrey's-By-The-Bay, in San Diego. Back by popular demand, this year's tour featured regulars like Flo & Eddie of The Turtles and The Grass Roots, as well as The Buckinghams, The Association, Mark Lindsay (former lead singer of Paul Revere & The Raiders), and first-timers, The Cowsills. While I've had the opportunity to see The Turtles and The Grass Roots perform together three years ago, it was a real treat hearing these other great artists as well! The backing band was made up of stellar musicians who helped lock in the sound of the original recordings we all know and love. No doubt the crowd at this sold-out event was really diggin' the perfect weather and classic tunes! 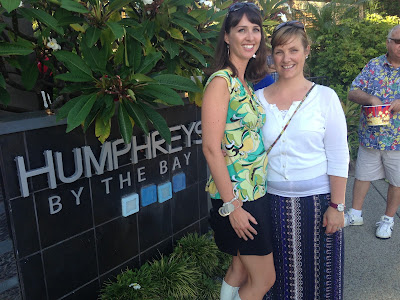 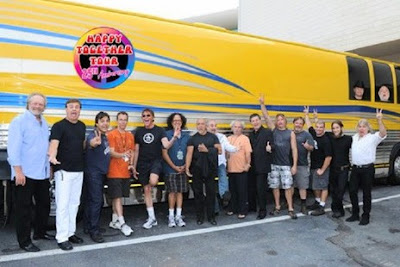 Our view from the back of the relatively intimate venue. Loved the location right next to the harbor in Point Loma (photo during The Association's set). 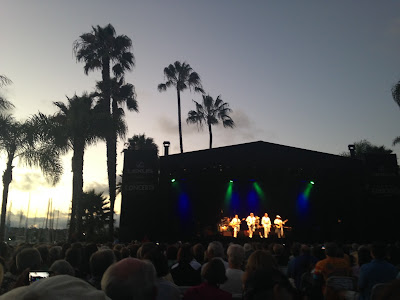 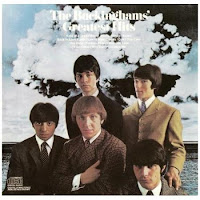 The first act of the evening was The Buckinghams, and not only did they sound great, they looked pretty good too! Featuring original members Carl Giammarese and Nick Fortuna, I loved hearing all their hits from "Kind of a Drag," "Susan," "Mercy Mercy Mercy," "Don't You Care," and "Hey Baby (They're Playing Our Song)." It was a crack-up when lead singer Carl brought out an old, retro jacket he wore in concerts in the '60s; he claimed he had to buy it back on eBay! Did I mention his voice sounded superb?! Love this Sunshine pop from Chicago! Here's The Buckinghams' #1 hit from 1967, "Kind of a Drag."

On their debut year with The Happy Together Tour, the next act featured the wonderful Cowsill siblings, Susan, Paul and Bob, whose hits include "The Rain, the Park and the Other Things," "Hair," and "Indian Lakes," to name a few. They even performed "Love American Style," which was the theme they recorded for the 1970s show of the same name. The Cowsills proved they can still harmonize beautifully and were fantastic addition to the Tour. Since the other songs mentioned have already been featured on this blog, here's a classic promo video of The Cowsills' "We Can Fly," a #21 hit in 1967.

Before intermission, we rocked out to Mark Dawson and Dusty Hanvey who have returned to carry on the music of the The Grass Roots. As mentioned in my concert recap from three years ago (here), these guys never disappoint and covered all the great ones including "Let's Live For Today," "Temptation Eyes," "Wait a Million Years," and "Midnight Confessions." I love their moving a cappella tribute to Vietnam vets, particularly to the ones who did not return home. Although it's been featured a few times before on this blog, here's rare footage of The Grass Roots performing their #5 hit "Midnight Confessions" from 1968 (Rob and Warren are enjoying themselves way too much, ha). Love this tune!

For the next set, you could feel the crowd's love for Mark Lindsay, original lead singer for Paul Revere & The Raiders. While this guy not only sounds pretty good, he had incredible energy and can still kick higher than a Radio City Rockette. This Raider covered the hits like "Kicks," "Hungry," and "Good Thing," as well as "Arizona" from his solo career in the early '70s. I couldn't
help but laugh at the ecstatic audience when he performed "Indian Reservation." I get this was a #1 hit in 1971, but I have never liked that song for some reason. Sorry, guys! Still a well-done performance for a happy crowd. Considering how much these guys were on TV, it's surprisingly hard to find good quality footage, but here's Mark Lindsay performing the #6 US hit "Hungry" with Paul Revere & The Raiders in 1966.

The night concluded with the entertaining Flo & Eddie (Mark Volman and Howard Kaylan) of The Turtles, who are responsible for keeping this Happy Together Tour together each year. After beginning their set by poking fun at the "lousy" music of today (in this case, Flo wearing a snowman suit and lip-syncing a bit to a certain popular Disney song), the guys jumped into their early folk rock hits like "You Baby" and "It Ain't Me Babe," followed by "Elenore" from the late '60s. They also condensed snippets from their solo show including nods to Frank Zappa and Bruce Springsteen (which I likely would have missed if I hadn't seen their show 3 years ago). Of course, this wouldn't be the Happy Together Tour without their quintessential '60s hit of the same name. Finally, the concert was recapped when each group hopped back onstage and performed a quick segment from one of their top songs, concluding with an all-hands "Happy Together" singalong (The Turtles' #1 hit in 1967). Also a great cover version by Johnny Cash, here's The Turtles performing the Bob Dylan-penned "It Ain't Me Babe" on Shindig! in 1965 (#8 in the US).


What a fun night hearing all the classics! Thanks to Humphrey's for hosting these great groups!
And thanks to my buddy, Jenny, for being a good sport as my concert buddy. :) 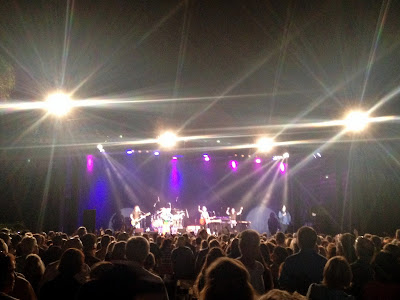 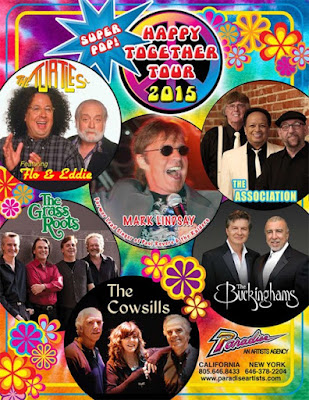 On a side night, this night holds the record for the most comments about my white go-go boots. I even had someone ask me if these were my original boots that I had kept all these years. Why, yes, thank you. I do look pretty good for 65! 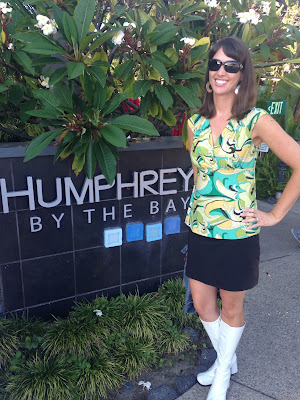 Farewell to a British Star 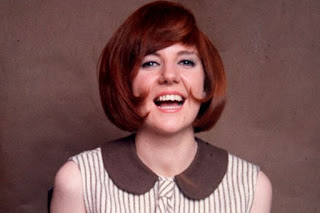 After 52 years in show business, English singer and actress Cilla Black passed away today at the age of 72. Born in Liverpool and championed by The Beatles, this talented lady scored eleven Top-10 hits on the British charts between 1964 and 1971, hosted her own BBC variety show for several seasons into the '70s, and continued as a prominent TV presenter during the 1980s and '90s. In 1964, "Anyone Who Had a Heart" and "You're My World" were #1 hits, the first single becoming the UK's biggest-selling single by a female artist in the 1960s.
Despite the popularity of all-things British in America, Cilla did not find a huge following in the US, however, "You're My World" was a modest hit in the US, peaking at #26 on the Billboard Hot 100. Although the original Italian version by composer Umberto Bindi was not a hit, even in Italy, the song came to the attention of The Beatles' producer George Martin, who commissioned an English version to be recorded by his protégée Cilla Black.

No doubt that this fine lady had a fantastic voice! Here's a live performance of "Anyone Who Had a Heart" in the mid-60s. 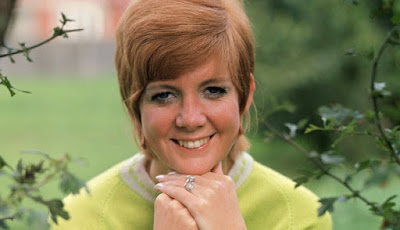