The Devil and Peter Tork 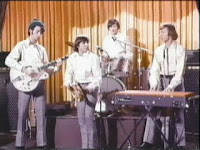 Harp Week: Part 3
During my early teenage years, my sister and I got hooked on the 1966 hit show The Monkees (however, only 30 years after it first aired!), and we've adored this originally made-for-TV band ever since. As mentioned in a previous post, The Monkees' history is quite fascinating as four, young actors/musicians, Michael Nesmith, Micky Dolenz, Davy Jones, and Peter Tork, were hired to play members of a band on a NBC music/comedy sitcom, and while they provided vocals on the millions of records that were sold, they were not allowed to play their own instruments on these recordings (at first) due to the tight filming schedule. However, wanting to have more creative control, they actually fired their own music supervisor and became a real band, writing, playing, recording, producing, and even touring their own music. In 1967, their records actually outsold The Beatles and The Rolling Stones combined! While the TV show only lasted for two seasons (plus years of reruns), they were dubbed "the Marx Brothers of Rock" by Beatle John Lennon (who was a fan), The Monkees TV show became a founding father for music videos, and The Monkees themselves still continue to gain new generations of fans, even 45 years later!

Okay, so what does this have to do with Harp Week? Well, one episode in particular caught my attention during my early high school days, initially piquing my interest in hoping to play the harp one day. 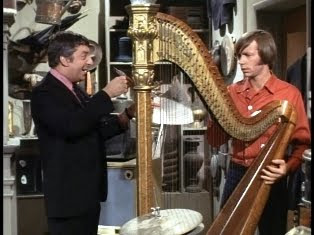 Premiering on February 5th, 1968, the second season episode entitled "The Devil and Peter Tork" is about Peter, the shy, naive Monkee (although quite intellectual in real life), who unknowingly sells his soul to the devil in order to purchase a golden harp. Theology aside, this episode is quite poignant and on a more serious side for this normally quick and zany show, and it actually received an Emmy Nomination for Outstanding Directorial Achievement In A Comedy Series For 1967-68. Anyway, here's the beginning portion of this classic episode. I always crack up at how easily Peter lugs the harp down the street in his arms (harpists, do not try this at home or you'll wind up in a chiropractor's office).


Until I became a harpist myself, I had always thought Peter Tork was actually playing the harp in this episode until I discovered that he did not know how to play the instrument; however, he does an excellent job miming. Although he was a classically-trained musician who could play several different instruments from guitar, piano, banjo to French horn, the show's producers would not give him enough time to learn the harp because of the filming schedule. So Peter just imitated films of the wonderfully talented Harpo Marx, and the result? Well, "not bad for a long-haired weirdo, eh, America?" (sorry, Monkee joke).

If you're dying to see the next portion of the episode, click here. Otherwise, here's the conclusion with a nice harp arrangement of the ballad "I Wanna Be Free."


I don't know about you, but after all this harp talk for the week, as well as my preparation for my big gig, I'm beat. Take it easy, and we'll see you next week! 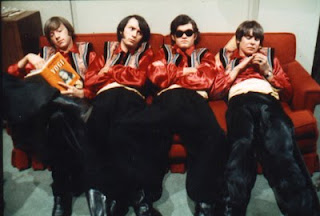