Rock and Roll with Horns

These next four groups each have a rockin' horn section, and fused jazz with rock and roll.

Formed in Chicago, Illinois, in 1967, this American 'rock band with horns' shortened their name from Chicago Transit Authority (because the actual CTA threatened legal action), and launched a successful career selling over 38 million records, charting five #1 album and scoring 21 Top-10 hits. Chicago is one of the longest running and most successful rock groups, second only to The Beach Boys in terms of chart successes among American bands (the two bands actually had a successful joint tour together in the mid-'70s, being one of the highest grossing tours of that time). Before the band later moved to softer sound, they started off with some great, rockin' tunes in the late '60s and early '70s, like their first Top-5 hit "25 or 6 to 4." Recorded in August 1969 (although not released until the following summer), this hot song was written by one of the band's founding members, Robert Lamm, and features Peter Cetera on lead vocals and a great guitar solo with wah-wah pedal by Terry Kath. The title is actually a reference to a songwriter trying to write at 25 (or 26) minutes to 4:00 in the morning. Although the audio is out of sync, here's a rare, "studio" video filmed a few years later. 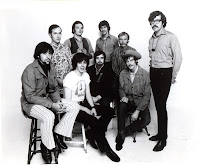 From New York City in 1967, Blood, Sweat & Tears was a "jazz-rock" band known for infusing a multitude of styles including rock, blues, pop music, horn arrangements, and jazz improv. Founded by musician Al Kooper (an important figure in historic sessions with Bob Dylan and Jimi Hendrix), this eclectic group first appealed to the musical counterculture of the '60s, before going through many personnel changes and becoming a commercial, mainstream success. With the signature voice of Canadian lead singer David Clayton-Thomas, the band won the Grammy Award for Album of the Year with their second LP, beating out The Beatles' Abbey Road. One popular tune from this album was "Spinning Wheel," which peaked at the #2 position on the charts for three weeks in July of 1969, and actually topped the Billboard easy listening chart, even crossing over into the R&B chart. Written by Clayton-Thomas and arranged by the band's saxophonist Fred Lipsius, this song also won the Grammy Award for Best Instrumental Arrangement. What a classic sound!

Formed in a Chicago suburb in the mid-'60s, The Ides of March were another jazz fusion band, best-known for their huge hit "Vehicle" in 1970. Released on the Warner Bros. Record label, at the time, "Vehicle" was the fastest-selling song in Warner's history, and reached #2 on the Hot-100, selling over a million copies and of course earning a gold disc. With the song's success, the group toured extensively throughout 1970, supporting many top acts including Jimi Hendrix, Janis Joplin, and Led Zeppelin. After an extended hiatus between 1973 and 1990, the original members reunited, and have been active since (even recording a double live album in Glen Ellyn, Illinois in 2002; sorry, personal shout-out to my sister's residence!). While this video incorporates cool footage from NASA's space program in the '70s, you can't beat this funky sound by The Ides.

Our final song of the day is a psychedelic soul/funk one by American soul singer Edwin Starr from Nashville, Tennessee. Joining Motown Records in 1968, his biggest success came with the release of "War" in 1970, an anti-Vietnam War protest song that is considered the most popular protest song ever recorded (even earning compliments from contemporary protestor John Lennon). Originally recorded by The Temptations in '69, the label decided to withhold their version (as to not alienate their conservative fans), and using Starr's intense vocals instead, his version hit #1 on the US charts, as well as #3 on the both R&B chart and the UK chart. Accented by a heavy horn section, this tune became an anthem for the antiwar movement and a cultural milestone, still popping up today in movie soundtracks and in hop hop music samples. Not the best quality video but Starr's James Brown-influenced soul shout and funky moves are loud and clear.