Well, would you believe I started this post back in March? Where does the time go?! OK, so back to more great music recorded with the help of The Wrecking Crew studio musicians (if you missed the initial post explaining these guys, go here). Today's first selection is a tune actually co-written by Wrecking Crew guitarist Billy Strange with Mac Davis, written for and performed by Elvis Presley in the 1968 film Live a Little, Love a Little. Released as a single in September of '68, "A Little Less Conversation" was only a minor hit in the US at #69, and included Wrecking Crew musicians like Hal Blaine on drums, Al Casey on guitar, Larry Knechtel on bass, and Don Randi on piano. After its use in the 2001 remake of Ocean's Eleven, it was remixed by Junkie XL (the first artist to receive authorization from the Presley Estate to remix an Elvis song), and the electronic version of the song became a world-wide hit, reaching the top-10 in about 17 countries, 10 of which were #1 on the charts. Here's the original "A Little Less Conversation" featured in a typical Elvis movie of the era. 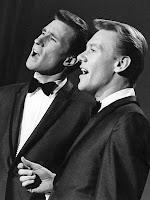 In 1955, Alex North and lyricist Hey Zaret were contracted to write a song as the theme for the obsure prison movie Unchained, and their song eventually became known as the "Unchained Melody." Becoming one of the most recorded songs of the 20th Century with at least 500 different versions, it was the 1965 version by The Righteous Brothers that became a jukebox standard, even achieving a second round of great popularity after being featured in the 1990 film Ghost. Produced by Phil Spector (who regularly used Wrecking Crew musicians), it was performed as a solo by Bobby Hatfield of The Righteous Brothers, and peaked at #4 on the Billboard chart. Here's a great live performance of a classic. 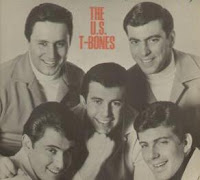 The T-Bones were a short-lived American pop group active in the mid-'60s. The group had a hit single in 1966 with their instrumental "No Matter What Shape (Your Stomach's In)," whose melody was from an Alka-Seltzer commercial. With Wrecking Crew session musician Hal Blaine on drums, this tune reached #3 on the Billboard chart. The group later became the AM soft rock trio Hamilton, Joe Frank & Reynolds whose first hit was "Don't Pull Your Love" in 1971. Not the greatest video quality but a cute performance from Hullabaloo.

The Rip Chords were an American vocal duo with Phil Stewart and Ernie Bringas (Phil & Ernie) who eventually expanded into four primary voices, adding record producer Terry Melcher (produced The Byrds) and co-producer Bruce Johnston (who later joined The Beach Boys in 1965). Since they were not a band and needed to be backed instrumentally by studio musicians, Wrecking Crew musicians were used including singer/guitarist Glen Campbell, drummer Hal Blaine, bass guitarist Ray Pohlman, and other prominent members. With vocal layering by only the producers (Bruce and Terry), "Hey Little Cobra" was mega hit for The Rip Chords, reaching #4 in February of 1964. Since the two were "ghostsingers" for the recording, they didn't receive any credit for their vocal participation, and two other vocalists were brought in to perform strictly on tours as part of The Rip Chords. Here's one of the highest ranking hot rod songs of all time. 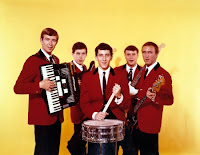 Today's final group featuring musicians of the Wrecking Crew is Gary Lewis & The Playboys, fronted by the son of comedian Jerry Lewis. Wanting to ensure a hit, the group's producer, Snuff Garrett, insisted on using experienced studio musicians and did not allow the band to play their own instruments on the recordings. With the help of Tommy Allsup on guitar, Leon Russell on keyboards, Joe Osborn on bass, and Hal Blaine on drums, the group had an impressive string of hits including "Everybody Loves a Clown." Written by Gary Lewis with Leon Russell, Snuff Garrett, and Thomas Leslie, this pop tune from the album of the same name reached #4 on the Billboard Hot 100 in 1965. Here's another cute performance from Hullabaloo (love that the drum kit is set up on the slide!).