Back On The Street Again 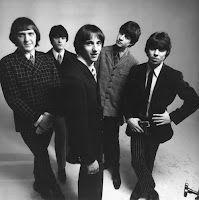 Sunshine Pop: Part 3
Yes, we're FINALLY getting to our final post for this summer's Sunshine Pop Series. Originally active from 1966 to 1970 (and currently performing on the Happy Together Tour!), The Buckinghams were a Chicago-based Sunshine Pop band with a "brass-rock" approach. With a name inspired by the British Invasion (as well as a nod to the beautiful Buckingham Fountain in their hometown), this popular group first found success with their breakout hit "Kind of a Drag" and continued with several Top-20 hits, including "Hey Baby (They're Playing Our Song)" which reached #12 in 1967. With an upbeat sound complete with strings and brass (and wearing awesome Nehru jackets!), here's a great clip of The Buckinghams in 1968. EDITED 9/25/12: Rats, this excellent video performance was removed from YouTube. The only clip available now is just the audio of the studio recording and slide show. :( With warm harmonies, upbeat choruses, and well-produced songs, The Turtles also crossed-over into the Californian sound of Sunshine Pop. Beginning as folk rock group in mid-'60s Los Angeles, it was their biggest hit, "Happy Together," that brought out the sunnier pop side of The Turtles, and they went on to have several other key singles written by the Bonner & Gordon team, including "She'd Rather Be With Me." Included on the Happy Together album in 1967, this song reached #3 in US in late spring and actually out-charted "Happy Together" overseas, reaching #4 in the UK. Complete with the usual antics of "Flo" (Mark Volman with the glasses), here's a live (vocals only) performance on The Ed Sullivan Show. (And don't forget, there guys are also currently performing on The Happy Together Tour). 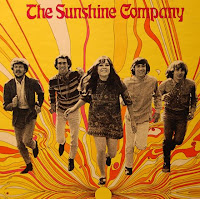 Well, you can't get much more sunny sounding than the name of this next group. Also from L.A., The Sunshine Company released their debut album in 1967, and although short-lived, did manage to score three hit singles in the U.S. before disbanding in 1968. Interestingly, they were the first group to record "Up, Up And Away" (although The 5th Dimension made it famous), and bassist Sims and drummer Bregante later backed Loggins & Messina. With a gentle folk rock sound enhanced by strings and woodwinds, "Back on the Street Again" was released in October of 1967 and reached #36. Featuring founding members/vocalists Mary Nance and Maury Manseau, here's the audio of a pleasant, groovy song by The Sunshine Company. 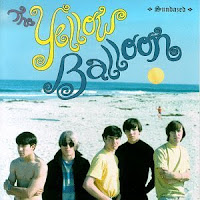 Although this may be too fluffy for some, this next tune is considered a Sunshine Pop classic by the one-hit wonder group The Yellow Balloon. In late 1966, vocal surf pop duo Jan & Dean recorded a new song called "Yellow Balloon" (actually, it was only Dean's vocals as Jan was recovering from a near fatal accident), but when producer Gary Zekley didn't care for the recording, he took the song to another record label and re-recorded the tune with noteworthy studio musicians while handling the lead vocals himself. The single was released under the name The Yellow Balloon in direct competition with the Jan & Dean version, and because many disc jockeys only played The Yellow Balloon recording, this single reached #25 on the charts on May 1967 while Jan & Dean's didn't make the top 100. Since was no actual The Yellow Balloon band, the record label put together a group of musicians (including Don Grady, known for playing Robbie Douglas on the TV series My Three Sons) who recorded their self-titled album. Here's a (lip-synced) performance at the (then) California Angels' Anaheim Stadium, however, I love how "thrilled" the ballplayers look towards the end of the clip when the group sings them a little tribute. (Video since removed from YouTube, so here's the audio).

And finally, we'll conclude this series with a nice one by The Lovin' Spoonful. Although known for their major contributions to the folk rock scene, the band went through some personnel changes in early 1967, which coincidentally led to a more pop-oriented sound. Before lead singer John Sebastian left the group for a solo career the following year, the Spoonful did produce two moderately successful singles in '67, including "She Is Still a Mystery" (#27). With a lush production, warm vocal harmonies, and an upbeat chorus, this Sebastian-penned song definitely fits the Sunshine Pop bill. Actually, every time my husband hears this tune, he asks if it's The Turtles, which actually makes a lot of sense, compositionally speaking (with the exception of Sebastian's distinct voice). Often incorporating an autoharp in their music, the contraption in this song is called a marxophone, which basically is a fretless zither with metal hammers used to strike the strings, creating a mysterious shimmer. From a TV performance with live vocals, here's a pretty, little gem by The Lovin' Spoonful.
-----------------------------------------------------------------------------------------------------
Other Sunshine Pop tunes: Harpers Bizarre "The 59th Street Bridge (Feelin' Groovy)," The Love Generation "Groovy Summertime", The Arbors "A Symphony for Susan", and Brooklyn Bridge "Welcome Me Love".
Posted by Leah at 10:40 PM 1 comment: 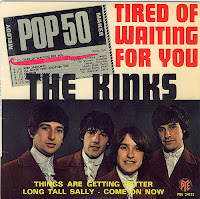 I'm coming back, I promise. What can I say, this summer has been quite busy, and lately, those occasional moments of free time have been devoted to sleeping rather than blogging. Plus, chasing a toddler is quite tiring too, so I feel justified in my napping. All that to say, here's a "tired" song that has been stuck in my head today. Another classic tune written by lead singer Ray Davies, "Tired of Waiting for You" was a big hit for The Kinks, reaching #1 in the UK and #6 in the US. I like how drummer Mick Avory subtly checks his watch at 1:00 into this clip, however, the hydraulic lift he's on would personally make me a little nervous (yeah, that's why those girls are screaming...). On that note, I'm off to hit the hay.