Motown: Part 1
As a complete change of pace from the generally rock and pop posts of the last several weeks (which I'm a bit partial to), this week is featuring the upbeat sound of Motown! On April 14, 1960, founder Berry Gordy Jr. formed the Motown Record Corporation in Detroit, Michigan ("Motor Town"), merging his first record label, Tamla Records (from 1959), with his second label, Motown Records. Motown played a huge role with racial unification in popular music, becoming a successful crossover of pop-influenced soul music. The "Motown Sound" generally used tambourines to accent the beat, prominent bass lines, strong melodies, and call-and-response singing style (like gospel music). Another aspect of Motown's success was Gordy's use of the same studio musicians that recorded the instrumental track for the majority of Motown songs, a tight-knit group known as "The Funk Brothers." Featuring primarily African-American artists, Motown influenced the sounds of rhythm and blues, soul, hip hop, and pop music for the decades that followed.

Motown's first successful female vocal group was The Marvelettes, who set the standard for the Motown girl groups that followed like The Supremes. During their eight-year run on the Billboard charts, the group had several hit singles including 21 on the Hot R&B Songs (rhythm and blues) and 23 on the Billboard Hot 100. In August of 1961, the girls recorded Motown's first #1 Pop hit with their debut single, "Please, Mr. Postman," a song that was later covered by The Beatles and The Carpenters.

One of the primary artists associated with Motown is Smokey Robinson, an American R&B and soul singer-songwriter, and record producer, as well as original member of Motown's first vocal group The Miracles. In addition to his successful solo career, Robinson's creative contribution to the label, along with his song compositions for several other artists, earned him the title the King of Motown. Written by Robinson and fellow group members Warren Moore and Marv Tarplin, The Miracles' "The Tracks of My Tears" is a beloved ballad from June 1965 that has been voted #5 in The Top 10 Best Songs of All Time and is one of the most recognized, most honored, and most covered songs (sung by other artists). Smokey Robinson's voice is a timeless classic.

The premier and most successful vocal act of Motown Records was the female singing group The Supremes, who, at their peak in the mid-1960's, even rivaled The Beatles in worldwide popularity. With a repertoire that included doo-wop, soul, Broadway shows tunes, psychedelic soul, and disco, the group had twelve #1 hit singles on the charts. After achieving mainstream success with Diana Ross singing lead vocals, Berry Gordy (as Motown president) changed the group's name to Diana Ross & The Supremes in 1967. Prior to their name-change, they released the hit single "You Can't Hurry Love" in July 1966, becoming another song included in the Rock and Roll Hall of Fame's 500 Songs that Shaped Rock and Roll. Written and produced by Motown's main production team, Holland-Dozier-Holland, here are the girls performing their signature song on The Ed Sullivan Show. (Sorry, original clip was removed due to copyright infringement.) 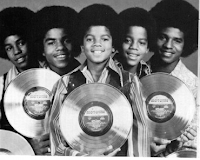 In 1968, a pop music family group joined Motown Records, going on to become one of the biggest pop-music acts of the 1970's. From Gary, Indiana, The Jackson 5 consisted of five talented brothers with the young Michael Jackson singing impressive lead vocals at the age of 11 (although publicized as 9 years old), and were probably the first black teen idols to appeal equally to all audiences (partial thanks to the successful promotional skills of Berry Gordy). Released in December 1969, "I Want You Back" became the Jackson's first #1 hit single, selling six million copies worldwide, and later ranking #120 in the list of the 500 Greatest Songs of All Time. From their first album, Diana Ross Presents The Jackson Five, here's the group's performance on their TV special in 1971.