Hot Fun In The Summertime

Well, my apologizes to anyone whose summer is already over. As there are no school-age children in my house (yet), I'm still making the most of my summer. In fact, a few weeks ago, I got the opportunity to take a little roadtrip to San Francisco and made a stop at Amoeba Records on Haight Street (figured all you audiophiles would appreciate that it). By the way, it turns out many of those hippies that came to the Haight-Asbury district have never left! Anyway, here's the last of those fun summery songs of 1960s. 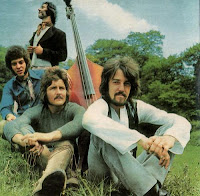 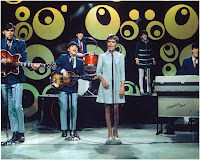 Another popular song of summer is this fun tune by the beloved singing family The Cowsills. After the success of their first single, "The Rain, Park, and Other Things," the band followed up with another million-selling hit in 1968 with the song "Indian Lake," which reached #10 in the US and #2 in Canada. Written by Tony Romeo, the song is about the group's favorite place to visit in the summertime, Indian Lake in Washington County, Rhode Island (where the band was from), but however most Indian Lakers believe it's describing another lake in upstate New York. In case you were wondering who Wes Farrell is that appears in this photo montage, he was a prolific songwriter and record producer at the time that produced "Indian Lake," as well as the made-for-TV family, inspired by The Cowills, The Partridge Family (which is why David Cassidy briefly shows up in a photo too). Complete with a cute, Native American-flavored intro, here's the audio of this summery hit. 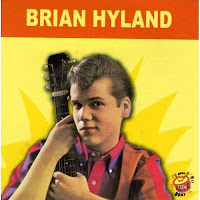 Well, the lyrics in this next tune bring us a depressing thought: "we gotta say 'goodbye' for the summer" (as a kid, I thought the line was saying 'goodbye' to the summer). Originally an unsuccessful single for The Four Voices in 1960, pop artist Brian Hyland found his second biggest hit (after "...Yellow Polka Dot Bikini," featured in the first Summer post) with a cover version of "Sealed with a Kiss." Released in June of 1962, this mellow tune reached #3 on both the American and UK charts, staying on the US pop chart for eleven weeks. Although it would again be covered by many other artists like Gary Lewis & The Playboys (#19 in '68) and Bobby Vinton (#19 in '72), Hyland's version was re-issued as a 1975 single in the UK and became a surprise #7 hit. While this is likely Brian Hyland's American Bandstand performance, the dancing in the background doesn't seem to fit the song so well...

To end on a more upbeat note, here's a classic one by the exciting San Francisco group Sly & the Family Stone, whose 'melting pot' sound incorporated many styles including James Brown-like proto-funk, Motown pop, Stax soul, Broadway showtunes, and psychedelic rock music. In the wake of the band's high-profile performance at Woodstock (which was said to be one of the best shows of the festival), they released "Hot Fun in the Summertime" that August of 1969, written by Sly Stone as a dedication to the fun and games to be had in the summer. This psychedelic soul/funk/pop rock tune reached #2 on the US pop chart and #3 on the US soul chart, and has been ranked among the "500 Greatest Songs of All Time" by Rolling Stone. Here's Sly & the Family Stone's live performance of "Hot Fun in the Summertime," followed by "I Want to Take You Higher" (a B-side of another earlier single that later became its own hit in 1970).