FRIDAY On My Mind 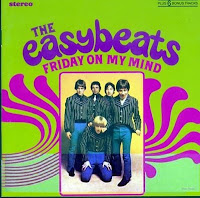 Songs for Each Day of the Week: Day 6

Happy Friday! Today, I've got two contrasting "Friday" songs for you, and I am definitely excited about this first one! A rock 'n' roll group inspired by the British Invasion was the Aussie band The Easybeats, the greatest Australian pop band of the 1960's. As all five members were from post-war immigrant families from Europe, they formed in a migrant hostel and began their career in Sydney in late 1964, later relocating to London after 'Easyfever' took over Australia. In November of 1966, The Easybeats became the first rock and roll act to gain an international pop hit with "Friday on My Mind," which was later voted "Best Australian Song" of all time by the Australasian Performing Right Assoc. (APRA) in 2001. This hit was written by the band's main songwriters/guitarists Harry Vanda and George Young (older brother of Angus and Malcolm Young of the 70's rock band AC/DC), and with the charisma and energy of the adorable lead singer, Stevie Wright, it's no wonder their live performances were so much fun. 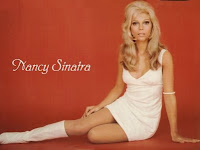 And on a completely different note, next up is the American singer and actress Nancy Sinatra, daughter of the famous singer/actor Frank Sinatra. Of course most know her for her signature song, "These Boots Are Made for Walkin'" from 1966 which bolstered her popularity, and however, she did continue to have a string of hit singles including "Friday's Child." Written by songwriter/arranger Lee Hazelwood, it was with his guidance that Nancy made her mark in the American music scene as he wrote pop songs for her and had her sing in lower keys. Although she did not have the crystal-clear tone like her iconic father, this particular tune showed a bluesy, soulful side to Nancy that proved she could deliver some power behind the bleached-blonde, frosted lips, and heavy eye make-up image. This video comes from an inventive TV special in 1967 called Movin' With Nancy, which featured Nancy in a series of musical numbers performing with several guests in outdoor locations (unlike the typical indoor stage productions before live audiences).